Get Social Media Savvy with @CyFairJoel: Check Your Analytics

A couple years ago, Twitter unveiled analytics data for all its users, which is a great way to evaluate your own performance.

To view your analytics, visit analytics.twitter.com while logged in or use the drop-down menu from your profile page: 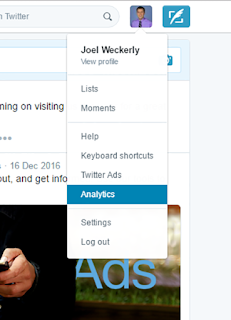 Right off the bat, you’ll get a 28-day summary revealing the percentage change in five statistical categories over the previous time period. Seeing as how I’m down by 30 percent or more in four of the five categories, it looks like I have some work to do here!

One thing I can do is tweet more often, which obviously leads to increased engagement.  But what else will get me more traction in the Twitterverse? Thankfully, Twitter analytics offers a month-by-month breakdown of your tweeting performance. And with this being the start of a new year, it’s an ideal time to look back on what worked well for you in 2016.

I recommend looking at each of your months and seeing what the “top Tweet” and “top media Tweet” were, taking note of the common themes and applying that for future use. For example, I quickly observed a few trends in my account:

I also like to look back at the specific month I’m in from the previous year since the chances are good for themes and events to repeat from year to year. If I look at my top “media Tweet” from January 2016, perhaps I can be reminded of potential milestones approaching for other coaches: 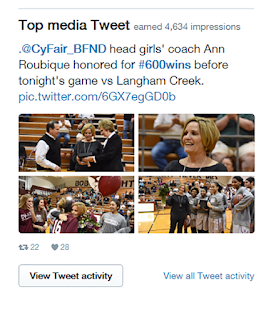 Before the flurry of activity overwhelms you this semester, take a few minutes to go over your analytics. Many of us want to increase our impact on social media, and Twitter’s tools give us a playbook to do so.

Have any more tips you think would be helpful? Hit me up!