…Twitter assumes that, since the tweet begins with a handle, you are replying to someone. As a result, the tweet only appears to the person you are tweeting in addition to all their followers. If someone else wanted to see it, they would need to visit your profile page and click “Tweets & replies.” Kind of annoying, right?

Thankfully, the Twitter engineers have assured us that this is one of many positive changes occurring with the social media behemoth in 2016. However, as they are rolling out these changes one at a time, this particular change has still not occurred yet.

So, in the meantime, get in the habit of using a period at the beginning of a tweet if you want to mention someone up front. It’s somewhat awkward at first, but it’s the socially acceptable way of ensuring your tweets achieve maximum visibility.

Many of you are already on it. Kudos to the @CookRangers for giving a great example of how to use the “.@”  so that more than just @CookPrincipal Maggie Wiley and her followers picked up on it. 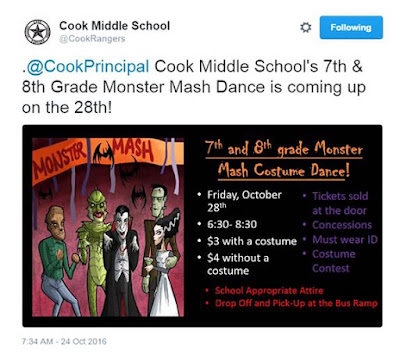 Have a tip you’d like to see included in this section? Hit me up!